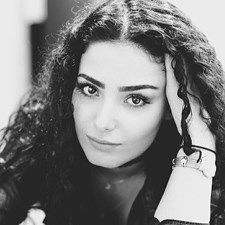 Lara Chamandi is a young designer and entrepreneur born and raised in Abu Dhabi, in the United Arab Emirates, although she is of Lebanese origin. Indeed, her family hails from the Chouf mountains, a bewitchingly beautiful Lebanese landscape redolent with the perfume of the undergrowth mingling with balsamic undertones of cedarwood and musical vibrant notes of oud.

And it is precisely this heady blend of nature, history and emotions that reverberates in her soul, causing her to return to Lebanon frequently and immerse herself in the unfathomable depths of energy engendered by this melting pot of distant and ancient cultures. The deep and intricate roots of her origins are the vital sap that flows through her creative veins, fueling her actions and bringing intensity to her gaze. Her heritage becomes a holistic vision and a personal expression of style. New landscapes merge on a horizon where East and West meet. Between modern zeitgeist and an archaic allure.

Again, in the Chouf district and almost as an act of kismet, stands the city of Deir al Qamar, otherwise known as the Monastery of the Moon. Legend has it that it takes this name because it was built on the spot where an ancient rock engraved with the symbols of the Moon and Venus was unearthed; in all likelihood, this stone was a remnant from a temple where femininity and fertility were celebrated. These qualities were embodied by Ashtar, a Phoenician divinity who represented those balmy bountiful lands bathed by the Mediterranean Sea. Ashtar, the first muse, first mother and first light of the morning that pierces the darkness of the night. Pushing aside the shadows to reveal a breathtaking beauty.

These are stories that Lara Chamandi listened to with rapt attention as a little girl. They symbolized a culture that she gradually assimilated before transforming it into a visionary venture. After having studied Architecture and Furniture Design in London, Lara Chamandi developed a strong interest in sustainability and started researching new natural materials, dreaming of the day she would create her own clothing range of ethical luxury items.

Taking its cues from art, nature, music and esotericism, and bathed in the soft light of the moon, the Lara Chamandi brand was founded in 2021.

And it was the beginning of a story. Her story.